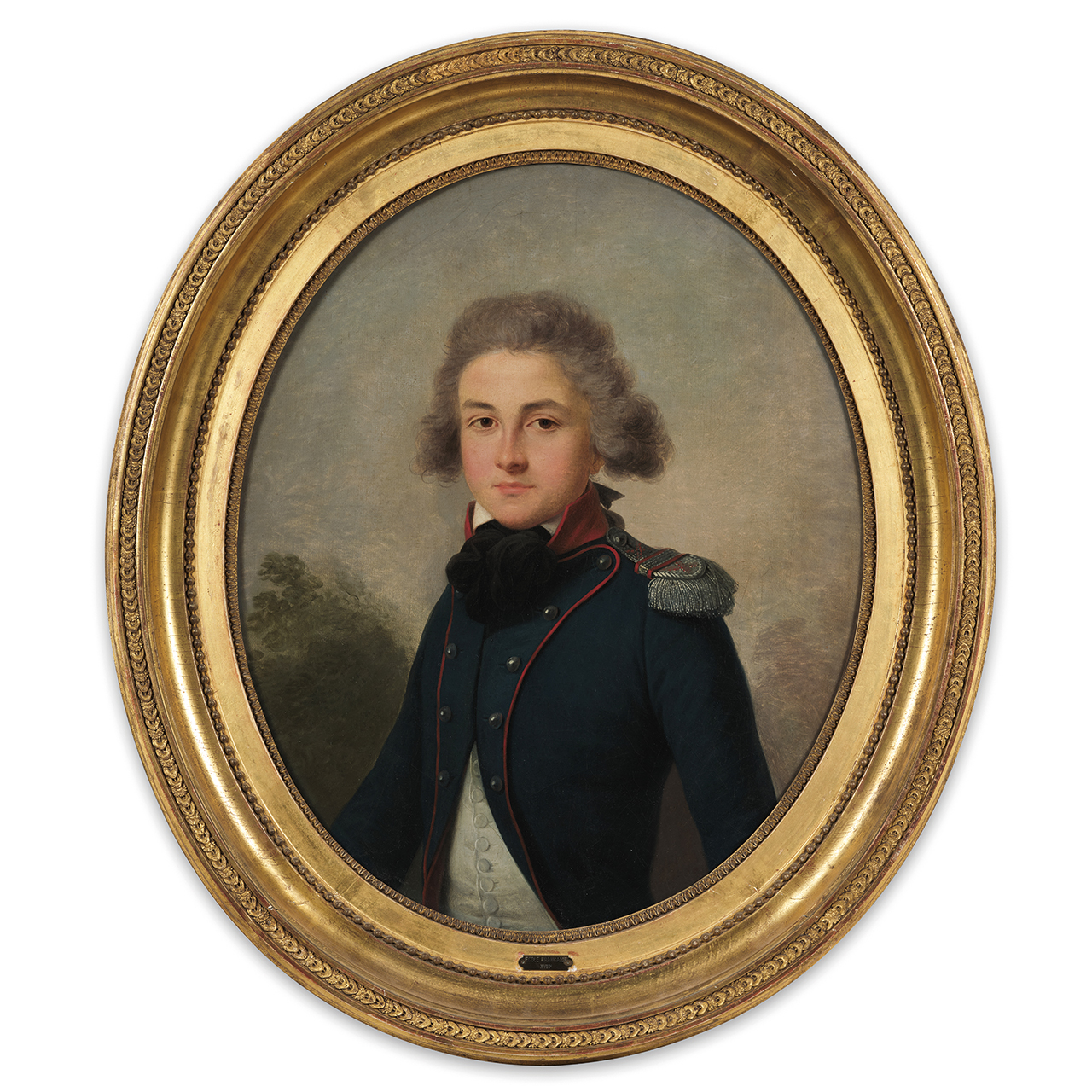 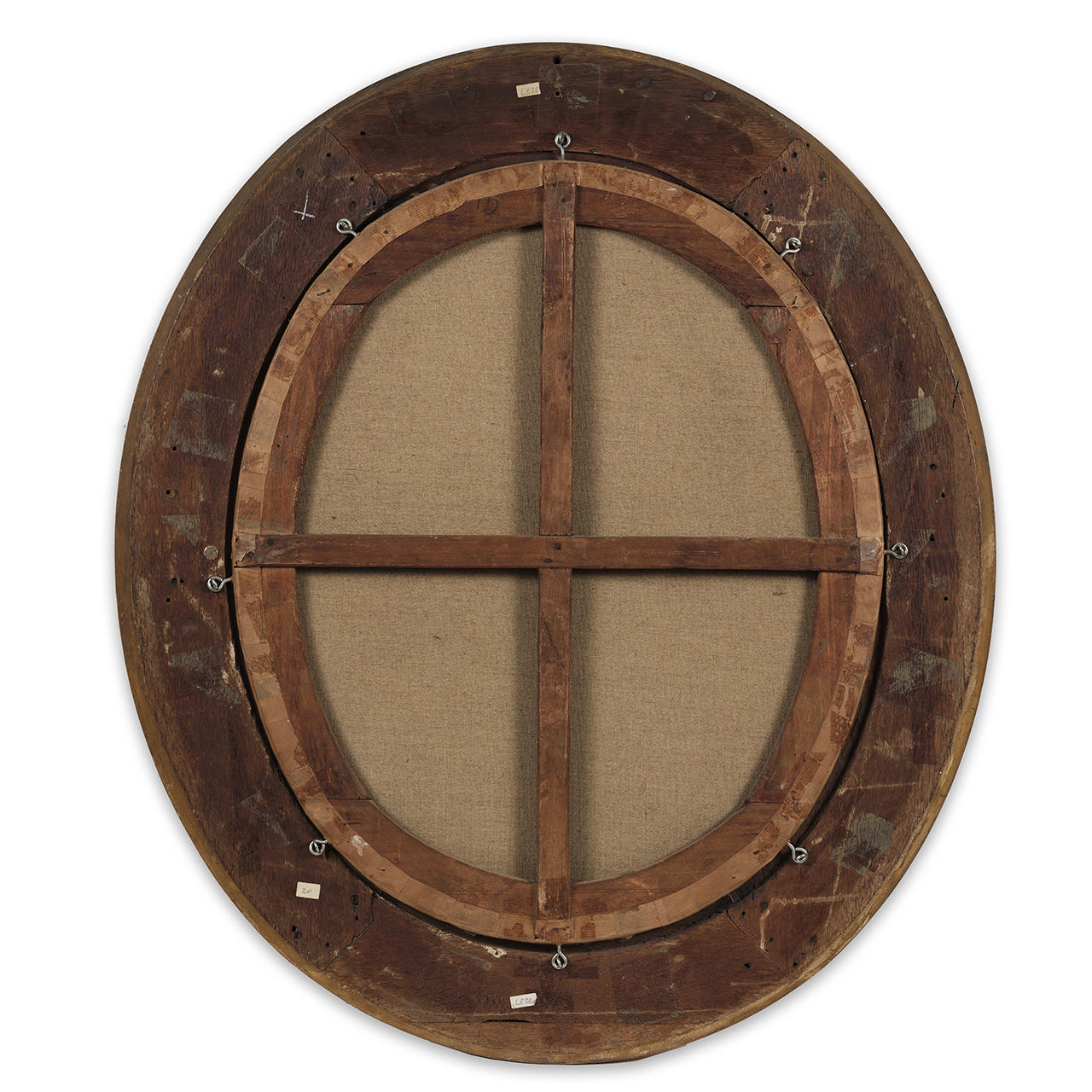 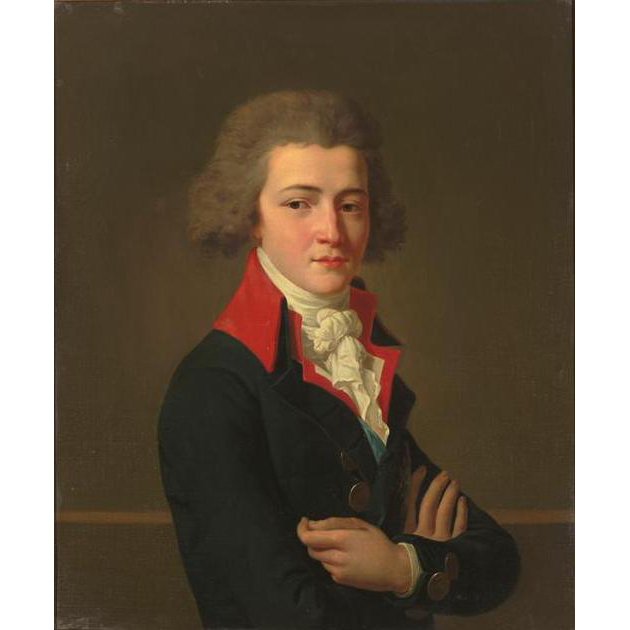 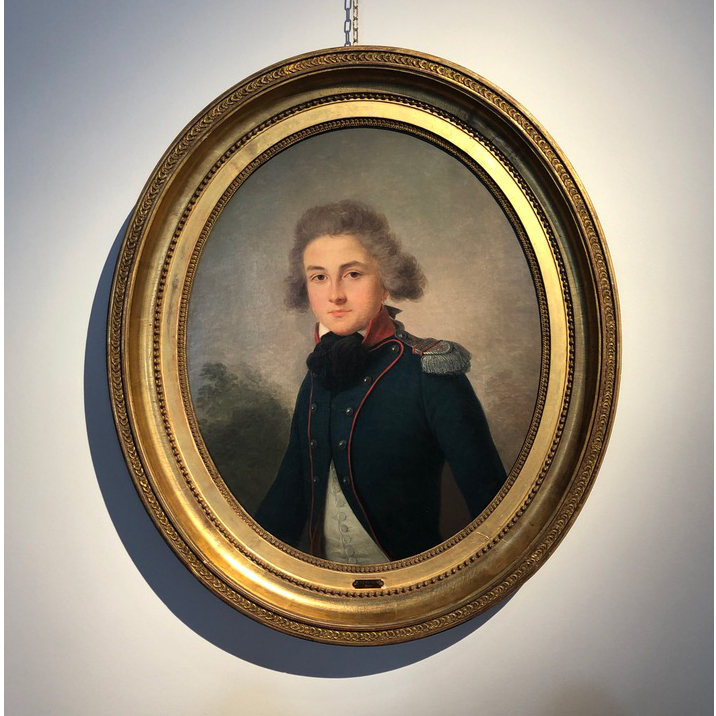 Louis Jacques Charles Bilderbeck de Vendôme (1769-after 1799) is depicted as lieutenant of the hussars of Bercheny, a position he has held since 1 May 1788. He is dressed in "surtout", model 1786. His hairstyle is typical of the period 1790-1792. On the basis of his "petite tenue", it is very likely that our character is on leave. We know that in 1791, he asked to go to Bliescastel (present Germany) to get married, request granted for one month, on November 20, 1791. It is therefore reasonable to think that he had this portrait done at the time of his marriage, at the end of 1791.

Antoine Giroust, who became the official painter of the Court of Orléans in 1791, joined the Orléans army in August 1792, then, his camp having been defeated, he withdrew to Lorraine. He nevertheless exhibited at the Salon in 1791 and 1793. The artist was in the East of France during the period when our model was getting married, which makes it possible to attribute the attribution given by the C.P.D.H.S. (oral communication). Let us recall that between 1800 and 1805, Giroust was mayor of Serres in Meurthe-et-Moselle, then of Mitry (1815).

Born on 21 July 1769 in Wissembourg, third son of Louis Jacques François Bilderbeck and Marie Anne Gautier, Louis Jacques Charles was a pupil at the Royal Military School of Vendôme. He began as a Cadet-gentilhomme in the Bercheny hussars regiment on 30 July 1781, replacing his elder brother. Second lieutenant in Froissy's company on 1 February 1785, he was appointed second lieutenant in Moll's company on 1 March 1788. Lieutenant on 1 May 1788, he commanded the Bercheny detachments at Charleville and Sedan in September 1790. He arrived at Eschwiller on 12 December 1790 with a detachment that would occupy posts dependent on Bitche. Then, after his marriage, he was Captain of a vacant company in the 1st regiment of hussars on 10 May 1792. He fell ill on 21 June 1792, and was still ill in April 1793 in Bitche. Struck off the controls on May 9, 1793 because he had been absent since June 1792, he was arrested by the Prussians during the capture of Bitche on September 29, 1793, and sent in captivity for 18 months to Mainz, Wesel, and Magdebourg. Returned to his homes on 21 March 1795, he was employed in the district offices of Sarre-Union, then head of a registry office, attached to the administration of the occupied estates. On 3 Vendémiaire, An VIII, he asked Wittlich for his reform leave as squadron leader, before his trace was lost. 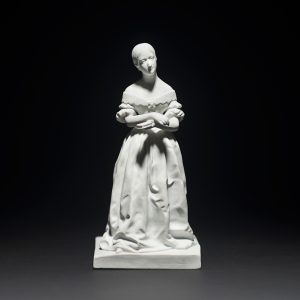 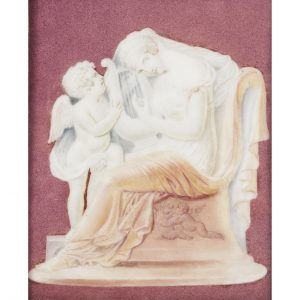 A plaque painted on porcelain imitating a cameo
From Empire period 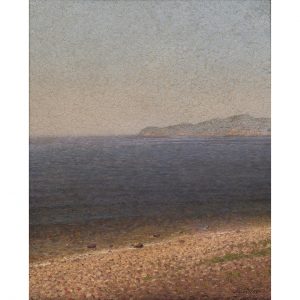 Dmitrieff, Russian school of early 20th century
The colors of the sea 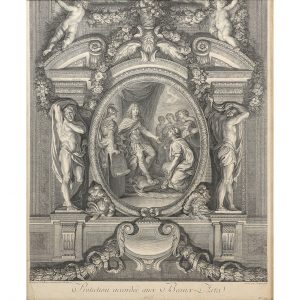